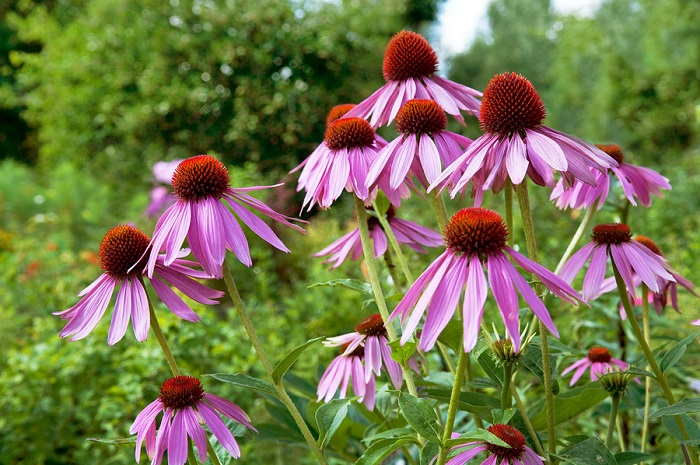 Interestingly, though, herbs with antibiotic properties seem to elude the bacterial “learning process” and thus do not appear to produce resistant bacteria.

Antibiotic herbs can be used around the home for minor infections and as antiseptics to prevent infection. Here are some of the more useful antibiotic herbs.

This smelly but effective herb is an antibiotic powerhouse. It’s also widely available and inexpensive. You can even grow it yourself.

Garlic works best when used internally. It can be made into ear drops and used to combat ear infections; simmered in broth or water, it makes a healing broth that works especially well for upper respiratory infections. Garlic can be minced and added to all sorts of foods, from pasta to salad. Many natural health practitioners believe that garlic is most effective when used raw – as juice, minced, or crushed.

You’ve probably heard of this herb – it’s all over the place during cold and flu season, and for good reason. Echinacea is a powerful antibiotic and, in the case of colds and flu, anti-viral. It also works as an antiseptic on wounds and to treat sore throats.

Tea made from Echinacea’s roots and aerial parts is not particularly tasty, but it can be drunk. Such a tea can also be used as a wash for superficial cuts and scrapes. Echinacea tincture, diluted in warm water, makes a very good sore throat remedy.

The golden yellow color of Goldenseal’s roots give it its name, and these roots are the parts that are used medicinally. Goldenseal works well topically and internally; however, it is such an effective antibiotic that it can affect intestinal flora, and should not be taken internally for more than a few weeks at a time.

Infused in boiling water and then cooled, Goldenseal has a reputation as a very effective eye wash for infections in and around the eye. Such an infusion also makes a very good wash for cuts and scrapes, and can even be used on surgical wounds, particularly on pets.

Did you know that ginger can work as an antibiotic? It is reputed to be effective against E. coli and Salmonella, both of which are food-borne bacteria that can cause significant illness in people. It has even been shown to treat and cure ulcers.

Ginger can be made into a tea using the fresh root or the dried and ground root. The fresh root is inexpensive, and a decoction can easily be made by gently simmering ginger slices in water and drinking the result, sweetened with raw honey. You can also eat candied ginger to help treat ulcers and fight infection.